I can relate to the need of changing shoes, whether it is after the sole wears down, when my feet couldn’t fit in them, or when the fabric rips apart. I usually try to make some use out of them without discarding them in the trash, but couldn’t think up a use for all of them. When I try to think of a company that recycles used shoes, I couldn’t think of one, until I read this article: This Company will Refurbish your Used Shoes, Recycle & Create New Pairs for Needy School Kids.

GreenSole is the company that works with used shoes for a cause of providing shoes for people in villages who need them. It was founded by Shriyans Bhandari and Ramesh Dhami, who are athletes in Mumbai. So far, they provided 50,000 shoes to people around the world. If you have a pair of shoes that you want to donate to a company that recycles them, visit the website of GreenSole and follow the steps of donating.

While researching articles on the app Nuzzel to share on Pick’n Run, I came found three articles on individuals and groups of volunteers who pick up trash on beaches, recreation areas, and even on a stretch of road. Each story is interesting in terms of why individuals pick up trash and the positive impacts they have on the environment and people around them from just picking up trash.

6,700+ Volunteers Pick Up 78+ tons of Trash from 146 Miles of Texas Beaches is about an annual event called Adopt-A-Beach Cleanup, which involves volunteers picking up trash at different locations. This year’s event involved 6,772 volunteers, who picked up a total of 156,699 pounds of trash from 28 locations along Texas’s coastline.

This Guy Picks Up Trash on the Side of the Road Just Because is an article recognizing a young man who is picking up trash along a stretch of road in East Bridgewater for no intentional reason except contributing to a good cause that he wants to.

These stories are worth looking into, and possibly inspire you to pick up trash for your park, neighborhood, or beach. It is a simple act that can go on for a life time.

This past weekend I was at my daughter’s soccer tournament in Davis, California.  It is interesting to see volunteers picking up trash during the tournament. I thought it was nice they were doing it, as it definitely made a difference with less human-made trash laying around the soccer fields.

The volunteers from the local soccer club that was hosting the event, and were in pairs.  Thus, it wasn’t one person alone picking up the trash. 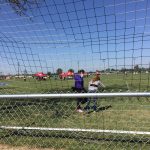 And come to find out, after talking with the volunteers, their trash pick duty was part of the requires volunteer hours they have to do with the club.  So the initiative wasn’t on their own accord.  This is interesting as we work on building out the motivation model with PnR and trying to provide less friction and more enjoyment for picking up trash.

To get a person to take action, you usually need to set an example for them to follow. Elizabeth Gehrman sets an example for people by picking up litter off the streets in Boston wherever she goes. She refers in her article how she is following the footsteps of former Massachusetts governor Michael Dukakis, who has been a one-man cleaning crew during his years (and demonstrates to the public of taking action of picking up litter).

She then later discusses about the amount of roadside litter that has decreased since 1968 (61% was what the nonprofit Keep America Beautiful has calculated), but how there is still about 51.2 billion pieces of litter laying around in parks, walkways, and roads in America. It is up to the individuals to take action of picking up litter to make their location pleasant, or let litter lie around in the public eye.